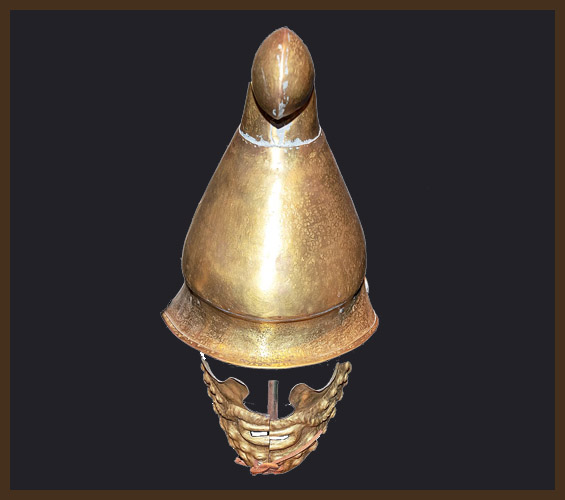 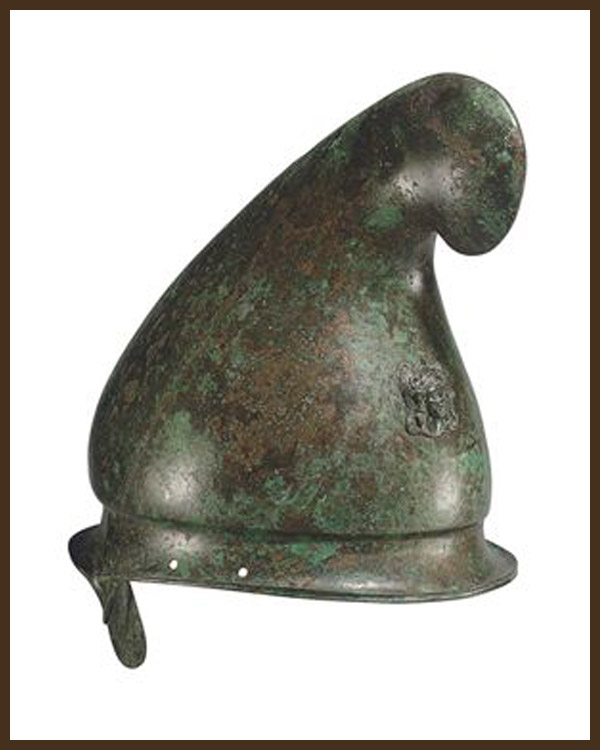 The Thracian helmet was also called the Phrygian helmet. It came from ancient Greece and was widely utilized in Dacia, Magna Grecia, Thrace, and the Hellenistic world. It also reached the Roman Empire.

Names that were given to the Thracian helmet were based on its shape. Specifically, it’s the high and forward-facing apex that look like the caps often used by the Thracian and Phrygian people. These pieces were usually made from leather.

Characteristics of the Thracian Helmet

Like other versions of the medieval helmet, most of the Thracian helmets were crafted out of bronze. Its skull was usually designed to be raised from one piece of bronze sheet. However, its forward-leaning apex was usually crafted separately, then linked to the skull.

The skull of the Thracian helmets was usually drawn out to a peak at the front section. It helped shade and conceal the user’s eyes while protecting the upper section of the face from any downward attacks. The face was also better safeguarded by huge cheek pieces that were made separately from the skull piece.

At times, these cheek pieces were huge. With that, they met at the center to leave a gap for the user’s eyes and nose. When constructed this way, these would feature engraved and embossed decor to imitate a mustache or beard.

Use of the Thracian Helmet

The Macedonian cavalry used Thracian helmets during King Philip’s day. Yet Alexander, his son, was claimed to prefer the open-faced Boeotian helmet. He had his entire cavalry utilize this helmet, as suggested by Xenophon, an Athenian philosopher and military leader.

The royal Vergina Tomb burial had a helmet that was a combination of the Thracian helmets. These were made of iron and would support its use and efficiency by the cavalry.

Thracian helmets were often worn to represent the infantry of Alexander the Great’s troops, like on the modern Alexander sarcophagus. This helmet was also prominently utilized around the end of the Classical period and into the Hellenistic era. The piece eventually replaced the earlier Corinthian helmets from the 5th century BC.

The early Thracian helmets that were commonly seen were the Chalcidian helmets.

Of the known types, this medieval helmet’s primitive version appears before the second half of the 4th century.

The helmet features a slight ridge that divides the sides and skull. Its neck guard curved inwards, and an arched opening was present for the ears.

Plus, deeply-rounded cheek pieces were hammered out from the sides.

Also, short nose pieces were usually present together with a pair of stylized eyebrows in low relief.

plus long and pronounced brows that met in an arch across the front. 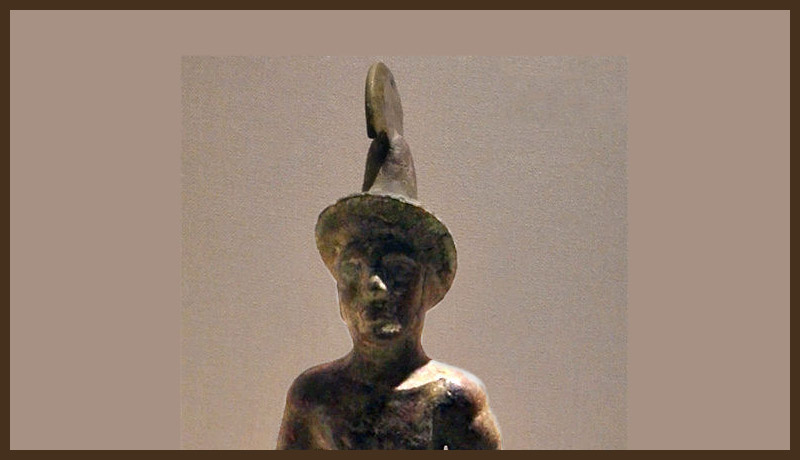 The bands featuring engraved ornaments, guilloche, and tongues separated the skull from the Thracian helmets’ sides.

Its neck guard was straight and with a bit of an upturned lower edge.

During the 4th century, hinged cheek pieces appeared with these helmets.

A few notable samples of the Corinthian helmets were found in Thrace. Plus, a remake of one Thracian noble using these helmets was known.

This is an early 5th-century helmet that featured flattened sides. It also had lengthy cheek pieces that concealed the entire face.

A warrior found buried in Golymata, Mogila Duvanli, Central Thrace, wore a leather helmet. It was strengthened and optimized by a bronze neck guard, cheek pieces, and a visor. The cheek pieces were designed with low relief patterns that included volutes.

During the 4th century, both peltasts and Thracian light cavalry started wearing the Thracian helmets. However, do note that they used a variety of pieces during battles.

The older version of the Chalcidian helmet found in the 5th-century tombs had engraved and decorated brows. These were continuously utilized until the 4th century. The more advanced versions had two variants with hinged or fixed cheek pieces.

The fixed version had a neck guard formed to fit the nape of the user. It reaches towards the shoulders, while its broad cheek pieces featured vertical sides moving to the cheeks. It curves to the rear and over the ears.

Its eyebrows are slightly profiled, and a vestigial nosepiece is present. The crown is raked-back in a sharp manner from the sides. Generally, many of these Thracian helmets that were found displayed signs of repeated wear-and-tear, plus riveted tenons and inserts.

The Thracian helmets featuring hinged cheek pieces featured high and well-rounded crowns from the front to the rear. For the skull, gentle curves break it from the straight neck guard shaped at the lower edge. Plus, the tongue-shaped cheek pieces were much longer than usual.

Parade helmets were more elaborate than the typical Thracian helmets and were continuously worn in Central Thrace. Portions of a sheet gold composite type were seen in Panagyurishte.

The ancient Thracian soldiers utilized the older version of these helmets until a modern version arrived. These appeared simultaneous with the invading Macedonian and Greek forces. For helmets featuring hinged cheek pieces, these might’ve belonged to the Thracian troops’ commanding officers.

There were hat or cap-like helmets that became widespread during the 4th century and earlier Hellenistic era. These were usually made of bronze, but the more modern Phrygian style helmet found in Pletena, was made from iron. It had a sheet of bronze to conceal the lower portion of the user’s face.

Interestingly, this specific Thracian helmet sheet was molded to mimic a man’s mustache and bear. Additionally, this helmet was discovered together with a rhomphaia – a bladed, close combat weapon. 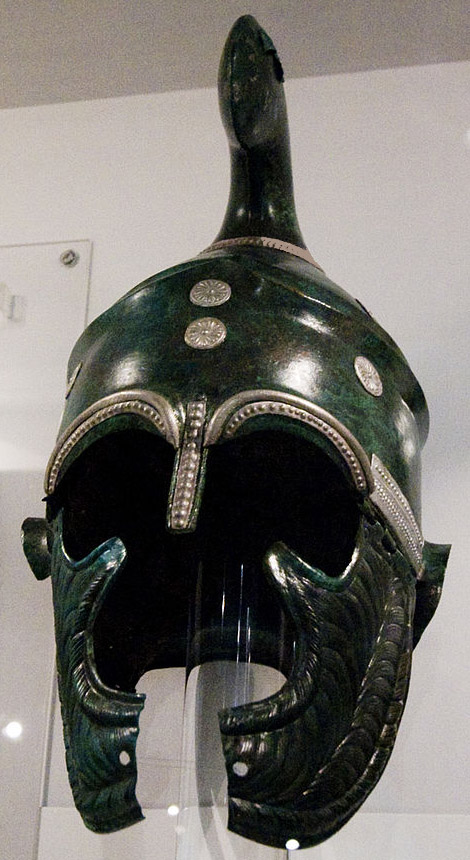 The North Thracian helmets featured Scythian designs. It included a few unique silver and gold models molded with numerous bumps on top. These features were said to represent the hairstyle of the user.

The Aghighiol greaves were seen together with a similarly-designed silver gilded helmet. This Thracian helmet style was somewhat conical and featured rectangular-shaped cheek pieces with shortened neck guards.

It also came with eyes and brows gilded and embossed at the top of the user’s eyes.

A nearly identical golden helmet from Cotofenesti and one found from the Iron Gates area is likely also related. These came from Getic noble graves and are considered to display a heavy Scythian influence due to the elaborate decors.

Like some acquired greaves, these pieces were likely parade items since they were crafted using soft metal. However, it was still likely that less ornate pieces with the same standard pattern might have been utilized for battles.