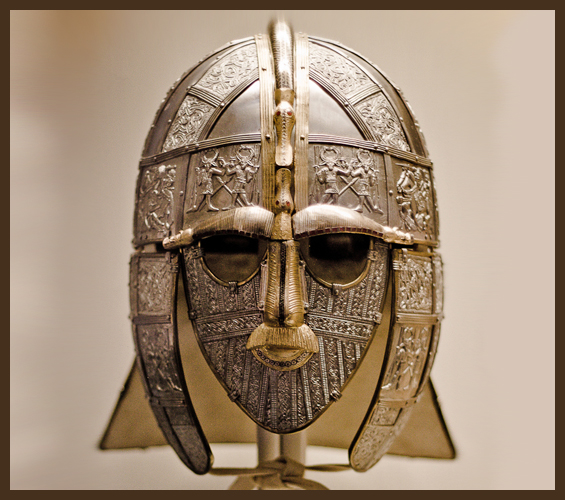 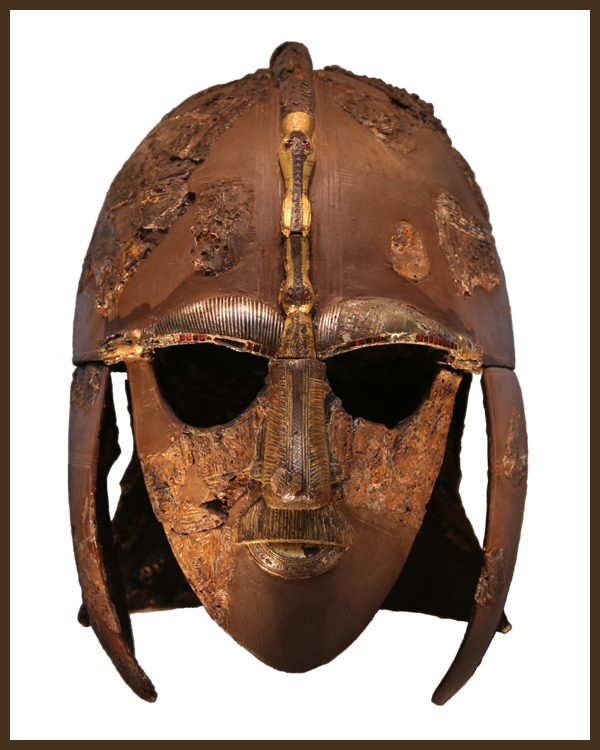 The Saxon helmet was a medieval piece used in battles, and only a few were acquired through numerous excavations. These pieces were known from Anglo-Saxon England and were the Benty Grange, Sutton Woo, York, and Wollaston.

There are a couple of other helmets that encircle these. However, they aren’t usually included since their identity cannot be determined.

The primary weapon of the Saxon warrior was the angon or lance. They even utilized the targan or shield, as well as a sword.

Their Saxon helmet was of conical shape and made of leather set over an iron framework. It was crafted with a nose guard to further protect the user.

Shield bosses were common in some early Anglo-Saxon cemeteries, yet Saxon helmets and body armor were quite rare.

The Sutton Hoo is an ornate Saxon helmet acquired during an excavation in 1939 of the Sutton Hoo ship. It was believed to have been owned by the king of East Anglia, King Raedwald. And with its elaborately-designed decor, the Sutton Hoo likely had another function related to being a crown.

This Saxon helmet was not only a functional armor piece that provided considerable protection during battles. It was also an aesthetic decorative piece that was considered prestigious due to its amazing metalwork.

The Sutton Hoo helmet is the most iconic piece coming from the most amazing archaeological findings made. Plus, it’s considered the most vital and essentially-known Anglo-Saxon artifact.

Quite interestingly, this specific type of Saxon helmet features a mustache, eyebrows, and a nose. It creates an image of a male that somehow gives off an intimidating vibe. This specific image became an essential character of the Early Middle Ages.

The Pioneer Helmet is also referred to as the Wollaston or Northamptonshire helmet. It’s a Saxon boar-crested helmet coming from the late 17th-century and was found in Wollaston, Northamptonshire, UK.

This helmet was found in a certain excavation in 1997 before the area was mined for gravel. The spot was known to be a grave of a young male. Aside from the helmet, other items that were found included a hanging bowl and a pattern-welded sword. These findings suggest that the burial ground was for a high-status soldier.

And due to its lightly-decorated fashion, the Pioneer helmet became a utilitarian iron fighting tool that

Features of the Pioneer Helmet

The unique feature of this Saxon helmet is the boar set on its crest.

Technically, boar-crested helmets were considered common to portray the image of Anglo-Saxon-based pieces.

It’s due to the Germanic tradition wherein boars conjured the protection of gods.

It had fluted strips of moldings that segregated the exterior into different panels.

Each of these was stamped using one of the five designs.

The helmet’s core was made of iron and featured a cap where a face mask, plus cheek & neck guards hung.

The cap was formed from one piece of metal. On each side hung iron cheek guards that were adequately deep to protect the sides of one’s face.

These were arched inwards both horizontally and vertically.

Two hinges on each side were likely made out of leather and were present to support the cheek guards.

This feature could be pulled together with the face mask to entirely conceal the face.

A neck guard was linked to the rear of the cap and was made using two coinciding pieces.

One was a shorter piece fixed within the cap, while a broad fan-like part was linked over it.

This specific part extended downwards but arched laterally to follow the neck’s line.

Its inner part provided the neck guard with optimized movement. And similar to the cheek guards, these were linked to the cap via leather hinges. 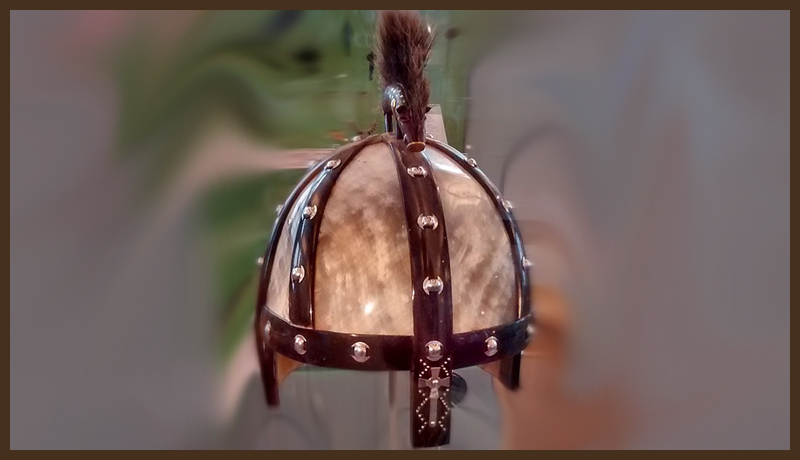 Lastly, these face masks were attached to the cap on either side and above one’s nose. Two cutouts functioned as eye openings.

There was also a third opening present in the hollow part of the overlaid nose section. The feature gave access to two nostril-like spaces beneath. Although small, these spaces were among the limited sources of fresh air when wearing the helmet.

The Benty Grange is another Saxon helmet that is boar-crested. It came from the 7th century AD and was acquired from a tumulus at a Benty Grange farm.

This piece was considered extremely vital since it was the very first Anglo-Saxon helmet discovered.

The Saxon helmet had two purposes: one was to protect the wearer during battles. Its other purpose was to indicate the user’s status. And because of its grandiose exterior, it may also have been used for ceremonial purposes.

Technically, headgear were rare in Anglo-Saxon England, and the Benty Grange Saxon helmet displayed the high status of its wearer.

Construction and Characteristics of the Benty Grange

This Saxon helmet was crafted by concealing the outer iron framework with horned plates. Inside, it was either lined with leather or cloth.

This Saxon helmet provided some protection against blows, and it was also decorative enough for ceremonial purposes.

The helmet has a distinct mix of technical and structural aspects, yet contemporaneous parallels are present for its exclusive characteristics. This is a specific Saxon helmet classified among the crested helmets utilized in Northern Europe. This was from the 6th – 11th centuries AD.

Its most notable feature was the boar along its apex. The boar faces along the nose portion, showing that the helmet exhibits a great association with paganism. It was also a representation of 7th century England when Christian missionaries began converting the Anglo-Saxons from classic Germanic mythologies.

Additionally, the presence of a cross may have been included to make it function like a talisman. Here, the idea of aid and assistance from any god would be welcoming to any warrior on the battlefield.

With that, the boar at the top of the crest was linked to protection. This suggests that such designs were common at some point. Some of the samples were the helmets from Guilden Morden boar and Wollaston.

The last known Saxon helmet is the York helmet. It’s also referred to as the Coppergate helmet, an 8th-century piece acquired in York, England.

This Saxon helmet is among the few that’s known to have survived until this day. Plus, it’s one of the most preserved too. 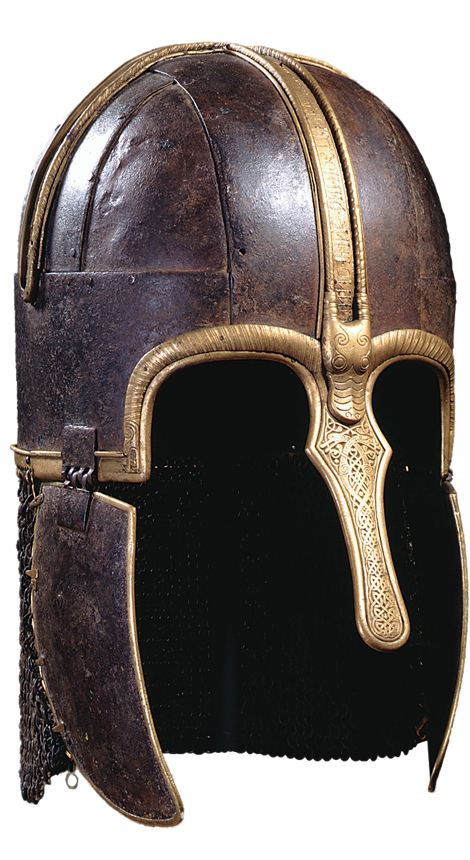 Features of the York Helmet

The York helmet is among the crested helms that were prominent and favored in Scandinavia and England throughout the 6th until the 11th centuries. Currently, it’s kept in the Yorkshire Museum as part of its collection.

Compared to other helmets, the construction of this piece is quite complex. Aside from its neck guard, the helmet’s standard form is shared by a contemporary pioneer helmet. The latter is a lightly-decorated fighting gear with four sections: two iron cheek guards, a camail, and an iron skull cap.

The iron cheek guards feature brass endings, while the camail serves to protect the user’s neck. For the iron skull cap, it sports brass edgings to optimize the helmet’s durability and strength. Craftsmen also included various decorations on the cap.

Hanging from the cap was a mail curtain and two cheek guards. The latter was made from different iron pieces, which were longitudinally and laterally curved inwards. Each of these was held in place on the brow band via hinges.

To ensure that everything is securely in place, the hinges were even made from iron.