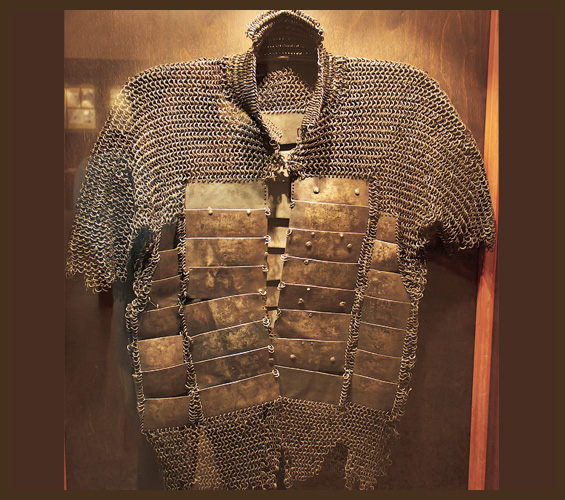 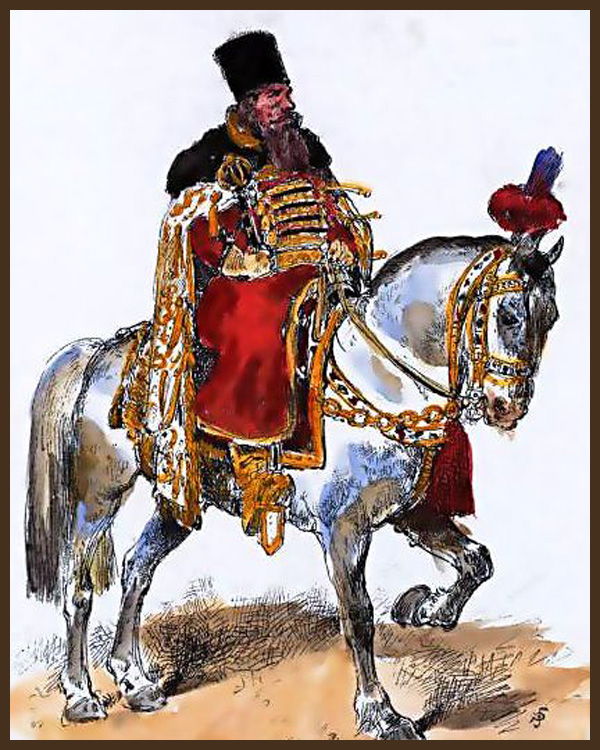 The First or Norman Period

The Second Period  The Eastern Influence

The first period of the Russian armor was also called the Norman period. Norman, or Norsemen, were members of the Vikings who settled in northwestern Russia.

From the 9th to 13th centuries, the Vikings were known to have founded Kievan Rus. Kievan Rus is a loose federation located in what is now Belarus, Ukraine.

Compared to the other medieval armies in Europe, the Russian army had a few units. The Russian armys units were distinct from the rest of the European armies with their armor. They wore chainmail and some other support armor.

The Russian soldiers and elite horsemen wore the chainmail under fur cloaks. The fur cloaks somewhat symbolized the old uniform of the Russian troops.

The Boyars were the highest-ranking forces and military commanders. Sometimes they wore armored vests in battles. Their fur coats would have rich patterns over the chainmail and would wear fur hats on their head. The Boyars would hold a long curved sword as their weapons.

Categories of the Russian Armor

By the time the 13th century came, the Mongols invaded Europe. Russia was no exception as the Mongols conquered Kievan Rus. This has led to the downfall of the said federation.

In the 13th to 15th century, each state in Russia had forces skilled in cavalry and archery like Mongols. Russian units also looked similar to the military units of the Byzantine. The Russian units wore cone-shaped helmets, used long spears, and similar curved swords.

By then, they copied effective weapons and armors to their system. They would use bows and arrows, maces, chainmail, padded armor, and triangular shields.

The Russian units had elements that made them different from the Byzantine units. These were long arrows in a large quiver, silk outfits, fur, and pointy hats similar to Mongols.

Other Russian units had crossbows, fur coats over chainmail suits, and round helmets. The round helmets were similar to those worn by the Byzantine crossbow units.

The Russian archer units didn’t wear armor but wore a cone hat and a padded outfit. Some units wore full armor. These armors however were not as full as the European knights.

The Russian armor that each unit wore was lighter compared to the European knights. It was made of several iron strips with details engraved in them.

The metal armored pieces were only worn to protect the chest, arms, and legs. They placed these metal armors over the chainmail.

For the helmet, some Russian troops wore a cone-shaped helmet over the head, which had chainmail under it. Other troops would just wear the chainmail over their heads without a helmet. Chainmail is still essential in the Russian armor piece.

The Medieval arms and armor of Russia are classified into three: Bronya, Shylem, and Shchit. Dospekh or Bronya is the body armor, Sholom or Shylem is the helmet, and Shchit is the shield.

These will be further classified into their different types.

This is also known as the body armor in the Russian Armor.

It is a form of armor made of metal rings. Rather than wire, the rings look like washers and appear large and stamped from a metal sheet.

It contained 10,000 rings, proven to be an effective defense against slashing saber blows.

Next, the Bakhterets are lame plate armors that came from the Mongol word bekter,

which means a type of armor.

They assembled the armor from narrow, oblong, horizontal, and slightly curved iron plates. Then they arranged these iron plates in vertical rows.

The armor provided exceptional flexibility with the strength of the armor protection tripled.

Another is Kalantar, a plate armor in the 14th century.

It consisted of metallic plates arranged horizontally fastened by a ring mesh. 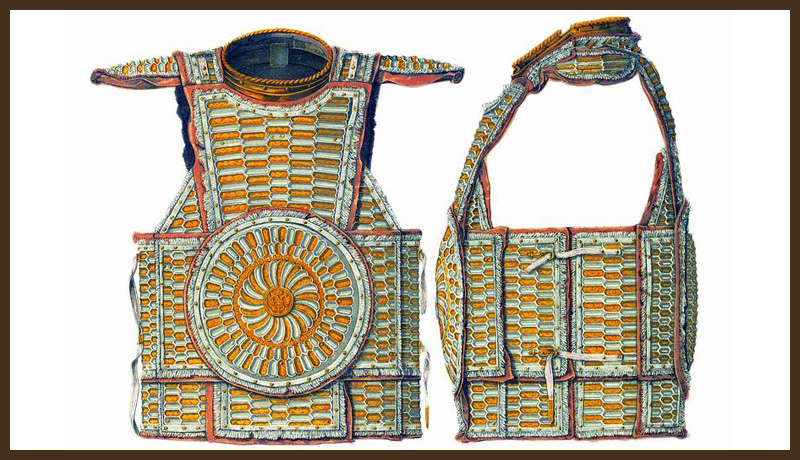 The plates used in this armor are larger than the bakhterets. It is a ceremonial armor decorated with gold, decorative patterns, and engravings.

Fourth would be the Kolchuga armor made from iron rings. The masters would prepare the rings before assembling the Kolchuga.

Some rings were open with uniform diameter while they welded others shut.

Other Kolchuga would be interlaced with copper rings to give a stylish look then polished to shine.

Next, the Kuyak armor was made of metal plates that are usually rounded in shape.

Yet sometimes, they were shaped rectangular, too. Unlike Kalantar this armor was separate from the leather or cloth base.

It was frequently worn alongside Kolchuga. The Kuyak armor was similar to the Brigantine but they had the metal plates inside the leather coat.
Another on the list is Tyegilyai. This was a quilted coat that resembled the western gambeson. It was a thick cotton fabric with metallic rings or plates quilted on the breast.

They designed it with gold and Venetian velvet with buttons and buttonholes. Usually, the poor warriors wear this because of its protective qualities and affordability.

Lastly, Yushman was another type of armor that combines rings, scales, or plates. From the Persian word dyawshan, it means mail shirt with horizontal plates interlaced.

Compared to the Kolantar, Yushman had smaller parts. It was usually worn over the Kolchuga.

The Sholom or Shylem is also known as the helmet. Different types of helmets used by the Russians are Barmitsa, Litchina, and Misyurka.

Shishak and Yerikhonka are the other types of helmets.

They make a Barmitsa of linked plates or mail net of small iron rings. The Barmitsa looked similar to a tightly woven fishnet or a Muslim womans veil.

Next is the Litchina, a metal face mask. It was moveable with a grotesque design. Hence they attached the Litchina to the helmet with a hinge. They called the smaller forms a half-mask.

Third, the Misyurka is known as an iron skull cap. It only protects the crown of the warriors head.

On the fourth is Shishak, a headgear with a conical helmet and a knob on top. It was a common protective headgear in the 12th to 14th century.

It had a very long pointed top, which ended in a sharp point. They would often attach a Barmitsa to the lower edge of the Shishak.
Next is Shlyemi, the metal head covering of a Russian warrior. They made these helmets from two to four plates of metal connected together. Then they designed and embossed it with silver, gold, and iron coverings.

Sometimes, they add some ornaments, engravings, or artwork.

Another would be Shlem, which is known as the semi-visor or the half mask. At the beginning of the 13th century, helmets began to have visors. These visors were used to protect the warriors face from striking and shooting.

It either covered the face halfway or completely. The masks were also made in hideous forms to frighten the enemy.

The rich and the nobles wore these helmets decorated in jewels, gold, and silver. They wore it over a cap or a thick cloth lining to keep the head protected. 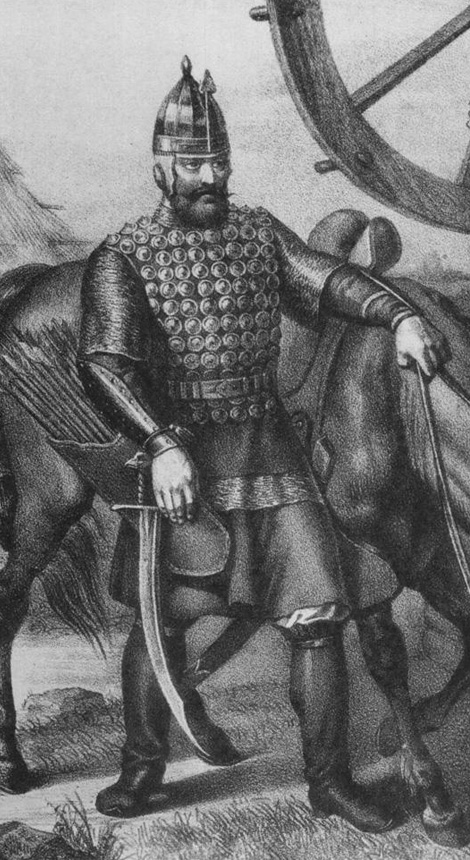 Shchiti is also known as the shield. It was wooden, flat, and consists of layers of planks. As part of the Russian armor, their shields went through transformations as well.
The Russian shield during the 8th to 11th century was round and one quarter the height of a man. This made it suitable for defense against blows.

It was either oval or funnel in shape which reinforced its protective properties. A slat was fastened on the shield, making it easier to carry on the arm.

The round shield is considered to be the earliest shield. It was light, making it suitable for both foot and horsemen.

Soon, long oval shields were used during the second half of the 10th century. When the 11th century came, the Russians used almond-shaped shields.

The almond-shaped shields were commonly used in Europe. It protected the horsemen from their chin down to their knees. As their helmet improved, the top of the shield was flattened.

Then by the 13th century, they introduced the triangular shield with a curve. This type of shield was held close to the body. Together with it, the curved trapezoidal shields were also introduced.

The Development of Shields

For a long time, the shields differed in their shapes. These shields were mostly made of wood, iron, reeds, or skins. The rim of the shield was referred to as the crown, while the space between the crown and cap is called Kajmoj.

The shields rear side had a lining and was held with bindings called Stolbtsi. The shields colors completely vary but red symbolized the whole Russian armor.

Today, when one sees a Russian armor of a few centuries ago, they cant believe but associate it with a nice cold set of clothing. It may not be the armor you imagine like the Vikings, Romans, or Greeks, but it served the Russians well.