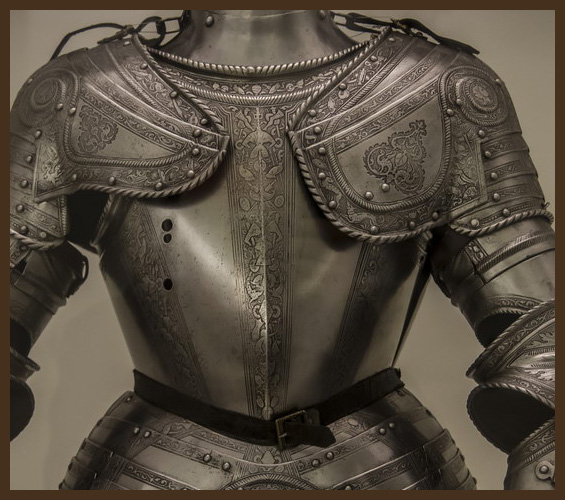 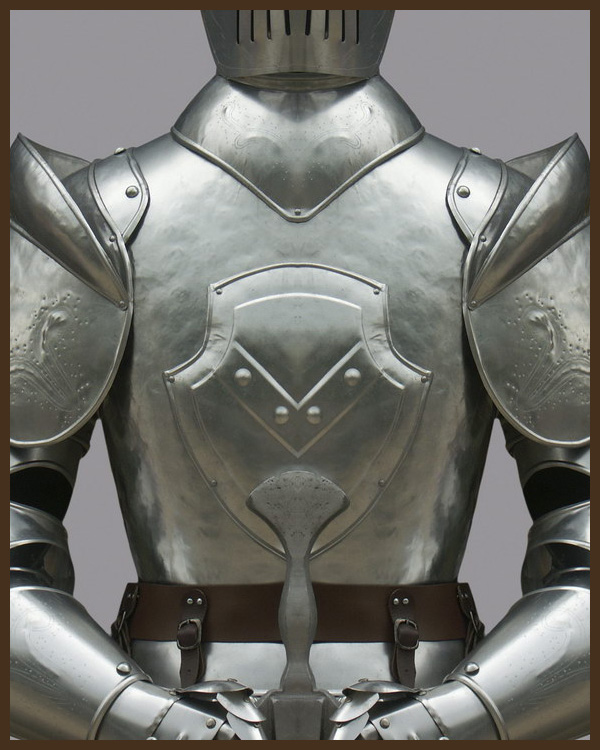 Most of you are familiar with the story of a princess being rescued by a knight in shining plate armor. People have very much adored his kind of stories, especially kids and teens.

Though the knights look glamorous and strong in the armor, not every armor looked elegant. Sometimes, their taste of elegance was far different from todays standard.

Despite the popularity of plate armor in the Middle Ages, the oldest recorded plate armor was found in 1400 BCE. Archeologists found it in Mycenae and they dated the armor from Mycenaean-era Greece.

The armor consisted of body armor, neck armor, and some plates to protect the abdomen. These were all made from bronze.

After the Greeks introduced these plate armor, the Romans followed. One of the most common Roman armor was the Lorica Segmentata which was made of several plates to protect the torso. It became popular for several centuries.

The Medieval Ages covered more than 700 years, spanning from the 5th to the 15th century. During this period, there was an internal conflict between Europe and Asia. The medieval times proved to be one of the richest periods in the time of armor history.

Because of this, armor was introduced to be worn by knights which became very important to them. The early medieval introduced the use of lamellar armor followed by mail armor.

Plate armor was first introduced during the 1250s to the 1400s. Later, they developed the full plate armor. This was their solution against piercing weapons since it prevented them from shock or trauma when struck by any weapon.

These plates were originally small and were individually worn by piece. Later, it became larger and covered the entire body. They developed new designs for better protection and comfort, while some became a fashion trend, especially when the wars ceased.

These armor were not only worn for battles, crusades, or ceremonies. They also had their very popular activity called jousting. This acitivty helped knights remain in shape and retain their fighting skills during their times of peace.

Process of Making a Plate Armor

Plate armors went through a rigid process to be effective.

Each piece took a lot of shaping and processing before getting to its desired shape.

Every piece needed to be measured so it could fit perfectly.

First, they would hammer the metal into a flat sheet. Metal went through very hot and cold temperatures to put it to shape.

Second, they would cut the metal into appropriate sizes and shape through heating.

This process was repeated until they reached the desired shape. Controlling the temperature of the iron piece was important.

In this way, the metal did not cool too rapidly or slowly. This caused the metal to become brittle or too soft.

Lastly, when the desired design of the plate is done. This will be sent to the millman who polishes the armor.

Decorations or carvings, and even painting them kept it from rusting.

This also gave an artistic look to the armor.

Additionally, some wouldnt always use metal when it came to creating armor. Some Italian armorers have experimented with whale bones or boiled leather.

Plate armor was made of iron, steel, leather, and some other large metal plates. There were many types of armor designed during the medieval period.

Parts of a Full-Body Plate Armor

A suit of armor covers the whole body from head to toe. It was made of iron or steel plates fitted together by the use of rivets and straps.

It may look heavy but they could be as light as only 40 pounds. Also, this was the strongest type of armor worn during the medieval period.

There were many kinds of helmets but only a few stood out. Though helmets started from protecting the scalp and back of the head, it improved to protect the sides and front, too.

Sometimes called a pot helm, the great helm looked like a 3D diamond-shaped metal with eye slits and holes to breathe in. It had a flat top and was made of two to three plates.

Sometimes, one could lift the front plate like a visor so the plate is hinged between the eye slits. Though it protected the head, it didnt protect the neck.

Bascinet became popular because it was comfortable and lightweight. The first bascinet was called the pig-faced helmet. This was small, round, had a pointed crown, and each side was curved down to cover the ears.

Bascinet had many versions. One was similar to the great helm except for the pivoted visor and its triangular-shaped.

Some had mail mantles covering the neck and shoulders that were attached to a visor. However, mail mantles were replaced by plates instead. And soon all types of bascinet became more conical.

Some other helmets at that time were the armet, sallet, barbute, and burgonet. A few of them had combs or feathers on top.

Though this part of the armor came later, they realized that the neck is one of the most exposed crucial parts of the body.

Two of the commonly used neck armor at that time were the gorget and bevor. A gorget looked like a collar that protects the neck, below the neck area and a bit of the shoulder.

A bevor covered the whole neck and extended to the jaw and chin of the wearer. This sits right on top of the shoulder.

A common breastplate was a solid shell of two pieces: one for the front and the other at the back. They riveted them together at the sides giving full protection to the torso.

Some have skirts attached to completely protect the torso. Another had an iron V-shaped bar riveted to the neck of the breastplate. This helped prevent some weapons from sliding into the throat.

A typical example of the breastplate is the cuirass. This may be supported with a plackart, which was a dedicated plate for the belly. It served to add protection at the lower part of the torso.

Other breastplates had faulds that protect the waist and hips. Some featured culets that protected the back or the buttocks.

The arm was protected by several pieces of armor. Examples of these were the spaulder, gardbrace, rerebrace, besagew, and vambrace.

Spaulder protected the shoulder and the rerebrace protected the upper arm. Connecting them to the lower arm was the cowter or elbow protector.

A vambrace protected the arm and the gauntlet protected the wrist and hands. Though made of metal, they were designed to have loose cuffs for flexibility.

Another shoulder protector was the pauldron, which was like a large dome-shaped piece that covered the shoulders. The common one was a large square-shaped plate on the left and a smaller one on the right. Later, it was spread more on the back. 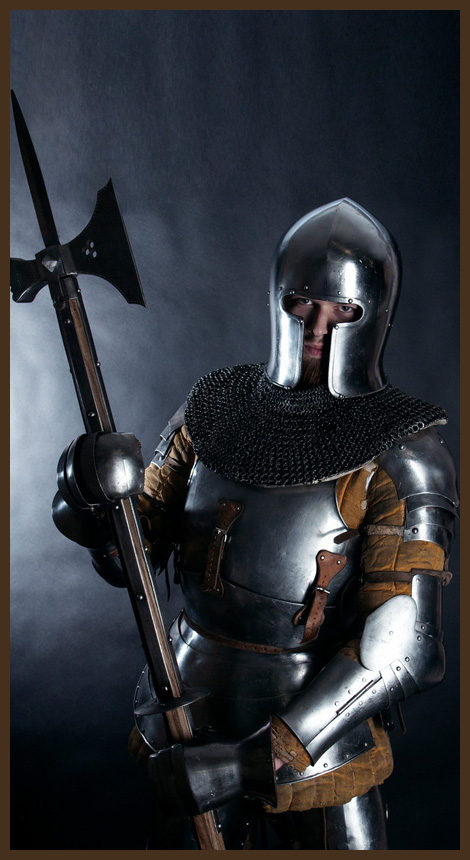 Just like the arms, many pieces of armor protected the entire leg. Examples of these were chausses, schynbalds, tassets, greaves, and cuisses.

Tassets were extensions of the fauld or breastplate. They were usually a large single plate or lames of plates that served to protect the upper thighs. Underneath them were the cuisses which are plates worn to cover the thighs.

Connecting the cuisses to the lower armor was the poleyn or knee protector. Sometimes the greaves or leg armor came as one piece with the foot armor or sabaton.

Europeans popularized the use of the suit of armor. Research states that the Germans were the first who completed a suit of armor. However, there are various claims that others started theirs at the same time.

The 15th century started the trend of these full-body plate armor.

Many designs began in Germany, Italy, England, and Serbia, but France and other European countries caught up. By the 16th century, suits of armor were meticulously designed.

Among the popular ones were the Gothic armor made for the Holy Roman Emperor. This later transformed to be the Maximillian armor influenced by Italian and German designs. Other popular armor include the Greenwich armor by England and the Gendarme armor of France.

The suit of armor gradually lost its purpose when bullets and firearms were introduced. Plate armor could no longer protect its wearer from a bullet but these inspired the modern body armor now. They built and designed them according to what they learned from these plate armor.