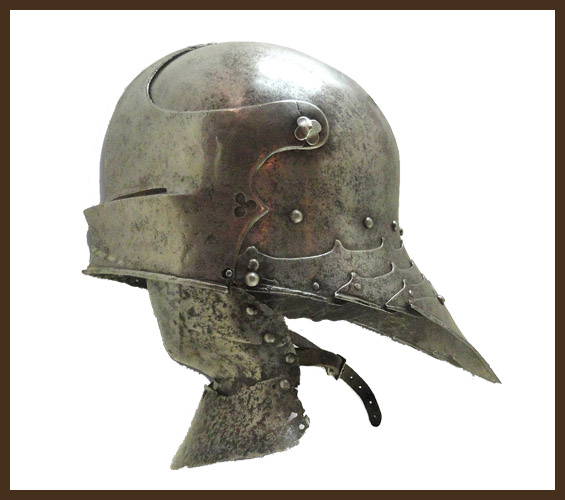 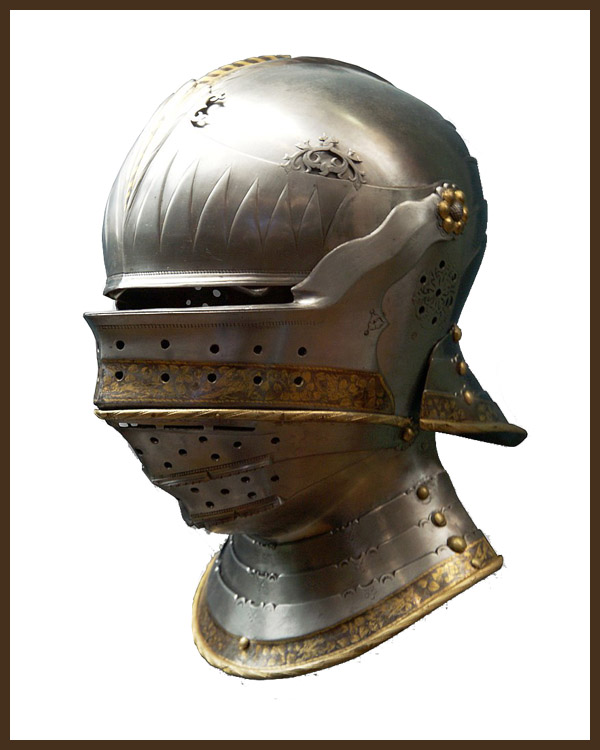 There were only two main kinds of medieval German helmets worn in the past. These were the sallet and the Pickelhaube. The designs of both helmets varied over time.

The sallet was one of the medieval German helmets of history. It was sometimes referred to as the celeta, schaller, and salade.

This specific medieval German helmet was utilized for combat since it replaced the bascinet during the mid-15th century. In England, France, and Italy, the armet helmet was a popular piece of armor. Yet in Germany, the sallet almost became their universal helmet.

Origin of the Sallet

The sallet seems to have come from Italy, where celeta was first recorded in a collection of arms and armor. It was from the Gonzaga clan that dates back to 1407.

In essence, sallets from earlier periods were alternatives of the bascinet, worn without a visor or aventail. Despite its absence, the helmets protection was increased by designing its sides to be more drawn forward at the base.

This design was followed to protect the users chin and cheeks. For the rear, it was arched and flanged to protect ones neck. One related helmet was the barbuta or barbute, which appeared in Italy simultaneously with the sallet.

Compared to the sallet, an entirely developed barbute consciously mirrored the elements of another helmet. This was the Classic Corinthian helmet of the older times.

It had a round-shaped skull yet was not as curved as the Italian sallet. The German-style sallet had a most prominent feature,

which was its rear.

It was drawn out to a long tail and at times, featured a couple of lames.

A specific aspect distinguishes the German sallet from the later medieval German helmets and sallets.

What differentiated them was the length of its tail, which became more evident over time.

These types of medieval German helmets sometimes sported a front that extended down.

It was to conceal the wearers upper face, while its eye-splits were present to provide vision.

The other versions of these kept the same style, yet the upper face had a different type of protection.

This was the detachable half-visor.

These types of sallets were usually worn with an individual scoop-formed plate gorget. It was called the bevor.

This piece is extended from the users upper chest just below the users nose.

It was necessary to protect the throat and lower face of the wearer. 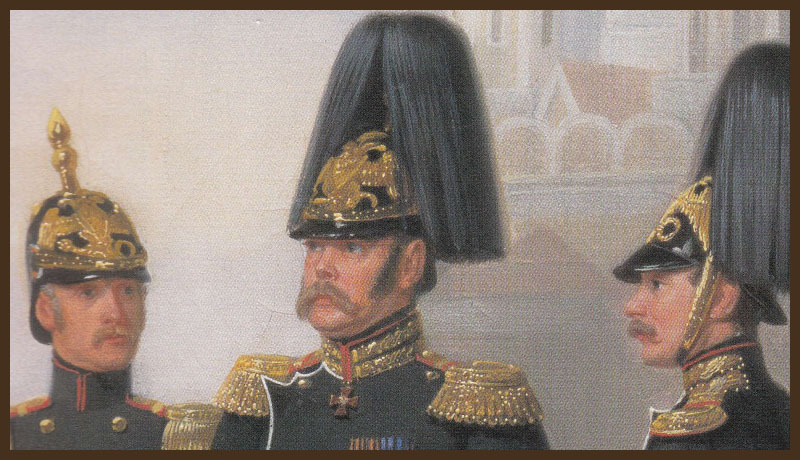 The previous generations of German sallets had the bevor connected from the visors same pivot.

Initially, these were attached inside the helmet’s skull. When the lengthy tail along the helmets rear was shortened, the later sallets appeared different from close helmets. With that, the connection of the bevor shifted to the skulls exterior.

Gradually, using the sallet on the field decreased in the 16th centurys first two decades. It was entirely replaced by the burgonet and closed helm. Its use was retained in the mid-century, but in a greatly reinforced design that’s specific for jousting.

The term Pickelhaube, also known as Pickelhelm, refers to a spiked helmet from the 19th and 20th centuries. This was one of the medieval German helmets worn by the German and Prussian military, police, and firefighters.

The Pickelhaube, designed by King Frederick William IV of Prussia, was introduced by the Prussian military in 1843. The helmet was an improved version of the conical shako hats that Prussians wore in the Napoleonic Wars.

Today, militaries in countries like Chile, Colombia, and Sweden wear it during ceremonies.

The basic Pickelhaube was made of boiled or hardened leather, which gave it a glossy black finish. It was reinforced with a metal trim that was often plated with or silver for officers.

At the crown, this headgear had a metal spike. It functioned as a blade tip for deflecting an opponents sword blows aimed at the head.

This spike was modified depending on the wearers battlefield duties. On formal occasions, it was outfitted with plumes.

The Pickelhaube was easily modified to represent ones rank and affiliation.

Early Design of the Pickelhaube

The early designs of the Pickelhaube featured a high crown, but its height was reduced gradually. Eventually, the helmet had a more fit form, and its weight also decreased. Along with that, producing the helmet reduced the cost.

In 1867, there were more attempts to make the Pickelhaube lighter. The metal binding of its front peak and the metal band that reinforced its rear were removed.

Pickelhaube of the Prussian Artillery

The Pickelhaube used by the Prussian artillery units had a ball-shaped finial instead of a spike. This modification was made in 1844 since the spiked design caused injuries on horses and damages on equipment.

Before World War I in 1914, detachable white or black plumes were worn with the Pickelhaube. German generals, dragoon regiments, infantry regiments, the Prussian Guard infantry, and staff officers wore this Pickelhaube.

The detachable plumes were made by unscrewing the spike and replacing this with a trichter (metal plume holder).

Musicians, Bavarian Artillery, and the Saxon Guards whole cavalry regiment wore a red plume. The Pickelhaubes most recognizable feature was the ornamental front plate and the spike finial.

The former indicated the regiments state or province.

For the plate, the most common design featured the emblem used by Prussia. This was a large spread-winged eagle. Various plate designs were utilized by Württemberg, Baden, Bavaria, and other states in Germany.

The Pickelhaube of the German military mounted two round cockades behind the chinstraps, which were attached to the helmets sides. The right cockade was the national cockade and was white, black, or red. The left represented the soldiers state; for Prussia, it was black and white, while Bavaria used blue and white.

The all-metal Pickelhaube, also referred to as lobster-tail helmets, were worn by cuirassiers. Its often seen in portraits of high-ranking political and military figures like Otto von Bismarck.

This headgear’s design was based on cavalry helmets from the 16th century combined with leather helmets’ features. It also had a unique articulated neck guard.

The Prussian Gardes du Corps wore Pickelhauben that were made of zinc alloy and copper (tombac). This helmet featured silver mountings.