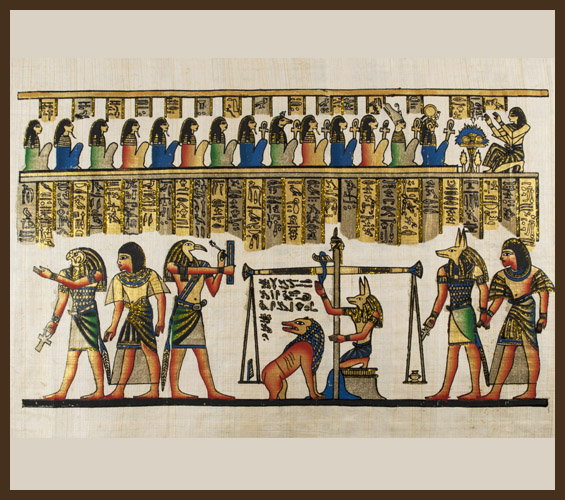 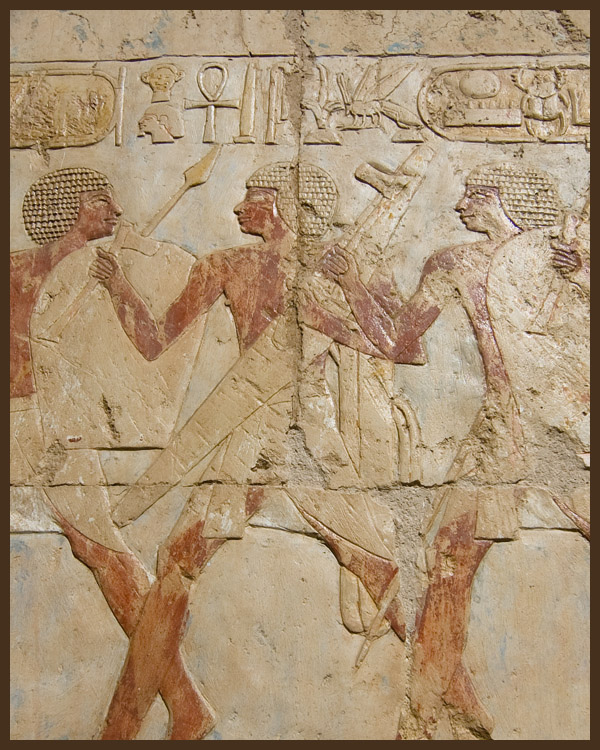 The ancient Egyptian army is always depicted in large numbers wearing full Egyptian armor. Many imagine them as a heavy and disciplined combat force. They were said to be equipped with powerful weapons.

The army consisted of conscripts from various districts called nomes. They were enlisted by the nomarchs or their respective governors before this time.

This early army was no doubt sufficiently effective for its purpose. But, it was not a group of trained soldiers armed with the most effective weapons.

History of the Egyptian Army

Before the Egyptians were warriors, they were simple farmers. They saw no reason to have an organized army.

The natural limits of the desert that surrounded the empire served them well. If the Pharaoh needed warriors to fight, he would call on these farmers to defend the country.

In general, the Egyptian army timeline is divided into three. First was the Old Kingdom which had naked or barely dressed and barely armed soldiers. This was the time for small conflicts or rebels.

In fighting against rebels, Egypt was once fine with just a little weaponry. The same could be said for conquering neighbors on the frontier. Bows and spears were the go-to attire.

The enemies were equally armed after all, but it was not the most ideal. It goes the same for their Egyptian armor. If one would call it armor rather than just clothing.

The next would be the Middle Kingdom, just as the Theban rule began. The nomarch of Thebes conquered Herakleopolis and ruled on both.

So, they needed to make several changes. Egypt soon extended its reach in neighboring regions. After some time, the country came into conflict with other nations like the Hyksos and the Hittites.

Lastly, is the New Kingdom when Egyptians united, then fought the Hyksos away and expanded.

The Hyksos took over the southern regions of Egypt so this encouraged them to fight back.

The Egyptians were aware they needed an army, so they learned to create powerful chariots and trained key army players.

They learned about new weapons and armor from the Hyksos.

This assembled a powerful army for the Egyptians. Egypt began to maintain a steady army from that point on.

Then, the Pharaoh led the army into battle during the New Kingdom. Egypt extended its territory and took a lot of nearby areas.

In the New Kingdom, Egyptians had improved their game. They began following their enemies’ superior arms and equipment. 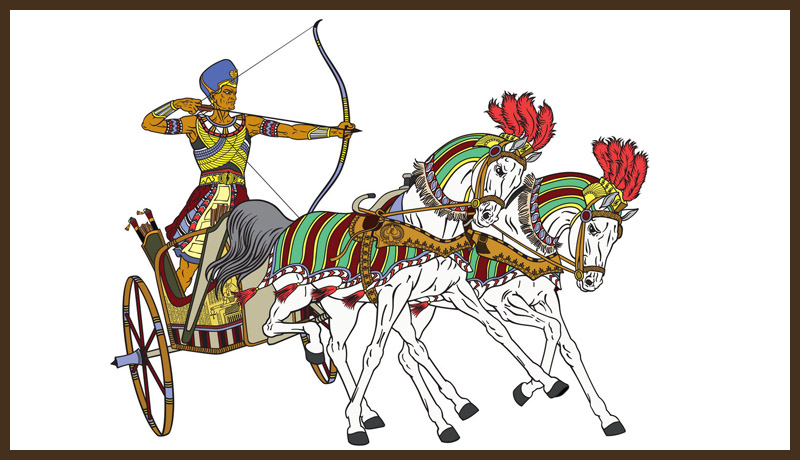 Even after the change, their soldiers seldom wore Egyptian armor. Scholars believed that this was due to the hot and sunny climate in the country.

In the Middle Kingdom Army, the Egytian warriors did have armor. They wore defensive gear in the form of leather shirts and kilts.

This may not have offered much protection against an arrow volley or other attacks. A typical soldier might get badly hurt from a slashing ax.However, these were certainly better than no armor at all.

During the New Kingdom, chariots with horses were introduced. Egyptians had nothing until they made their version of the chariot.

Often, the charioteer’s torso was protected by large leather bands.These charioteers would sometimes wear scale armor. It was depicted that the pharaohs were an exception.

The primary source for the Battle of Kadesh was the Poem of Pentaur written back in 200-30 B.C.

The poem visualized Ramses II wearing scale armor. His armor had sleeves and he fought as a charioteer. The scales were made of iron and copper and had holes.

The scales were then sewn into the fighters clothing. Then his armor wrapped the pharaoh’s entire torso. While riding the chariot, it served as a form of protection that covered his legs.

The use of armor was also symbolic or considered ostentatious. For members of the royal family, golden mail corsets were made. This came along with precious stones too.

Egyptian gods are also often portrayed wearing armor. The skirts of the goddesses were small, but were rich in jewelry. Intricate and fascinating details filled their headdresses and necklaces.

The soldiers of the Old Kingdom only had a spear and shield. However, these shields were only used occasionally. In an Egyptian armor set, a shield was the main piece of protection.

The first shields were about 1.5 meters long. These were possibly made from woven papyrus or animal skin. Unfortunately, these big and tall shields limited their movement. So, it eventually fell out of use.

During the Middle Kingdom, the heavy infantry used wood and leather shields. The shields became smaller and could be carried by the soldier. The shape and size differed according to ones weapon.

The big tall shields reappeared when chariots arrived. Each chariot needed three soldiers. One to carry or drive, the second was an archer and the third held the shield.

In the Battle of Kadesh, Hittite chariots fought at Kadesh against the Egyptians. Ramses II was staffed by a driver. Alongside him were an archer and a shield-bearer.

By the time of the early New Kingdom, shields were made of wood covered in animal hide. Metal shields ap but it wasnt different from a wooden shield, since it offered the same protection.

After the Battle of Kadesh, the two Empires formed the first world treaty. As a result of the new relationship, skilled craftsmen went to Egypt.

This included the development of the much sought-after Hittite shields. These shields were made of iron, like the Hittite swords and armor. Eventually, the city of Egypt turned into an essential weapon producing center.

The Egyptians flourished for a while. But later, the time came when the weapon and Egyptian armor werent enough. The New Kingdom declined, and then came the Persian Rule and Alexander the Great. 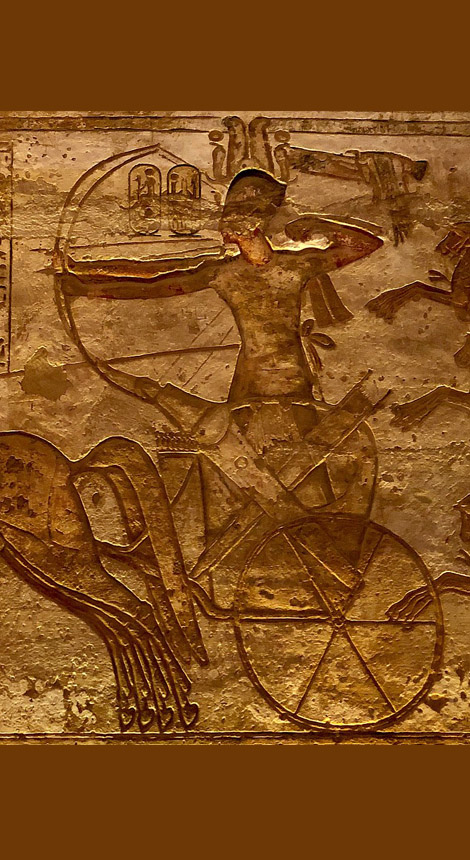 In the Old Kingdom Army (2686-2181 B.C.), the soldiers were shown to wear skull caps. They were naked or barely had any clothing. These were either farmers or slaves forced to go into battle.

Much as in civilian life, Egyptians seldom covered their heads in battle. The pharaohs, again, were an exception, and they also wore special headgear.

During the coronation of Horemheb, he wore a royal helmet. He was then assigned to circuit the sun.

In the New Kingdom Army, helmets were finally standardized. Together with some other weapons, helmets became essential for Egypt. These were likely made of iron and copper with bronze casting.