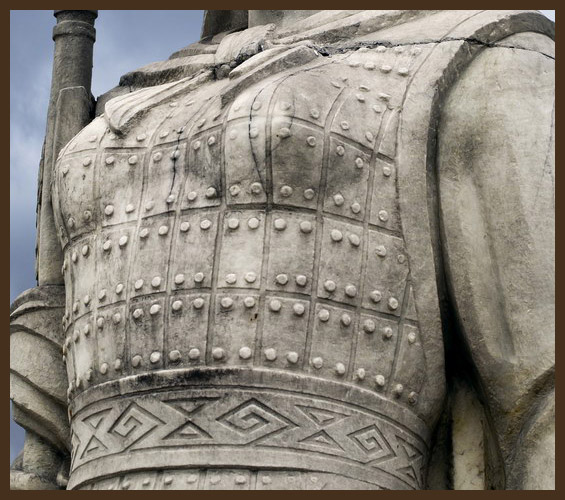 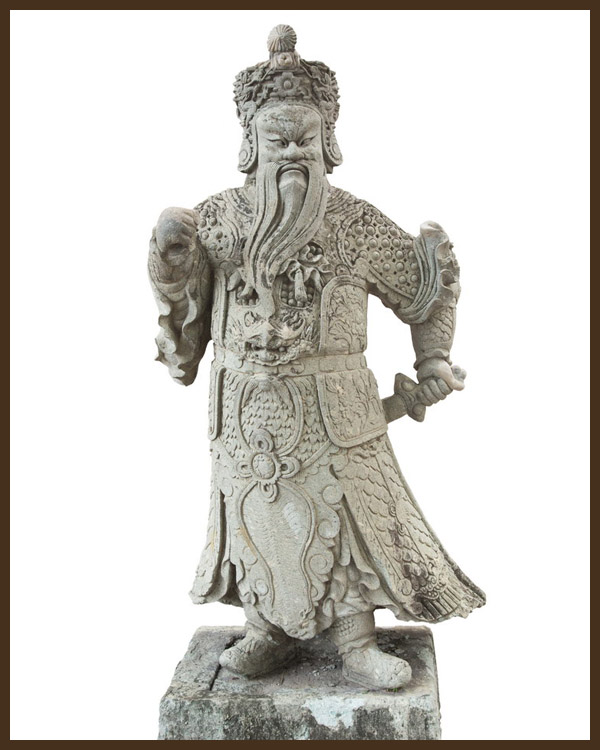 If you’ve watched historical movies, the Terracotta army in full Chinese armor may sound familiar. The Chinese sculpted these armies for their fallen first emperor, Qin Shi Huang. They believed that it would guide and protect the emperor in the afterlife.

These historical artifacts helped historians identify the military techniques of China. How would these Chinese soldiers defend themselves from their enemies? What will they use as protection?

The Chinese Dynasties Involved in Developing the Chinese Armor

In the Neolithic Period, the first Chinese armor was made. However, these pieces of armor were used to impress rather than to serve its true purpose. They painted their armors with animals and demon masks.

It was made from animal skin, usually from cowhide and rhinos. They sometimes included shells to add a layer of protection. As time went by, armors were gradually improved to be weightless and sturdy.

Chinese always designed their armor for mobility. Comparing them to the European metallic plates and chain mail, the Chinese opted for lighter materials. Though they would be using iron helmets then later add metal lamellars, these werent as heavy as the medieval armor.

These simple armor could offer protection from cuts and work as a cushion against hits. But it did not protect them from penetrating weapons.

The Zhou and Qin Dynasties

The Zhou dynasty (1046-256 BCE) believes in the philosophy of Confucious. At that time, they were the first to start the idea of lamellar armors.

They made small rectangles of leather overlapping each other. They connected them using hemp cord or rivets and leather thongs.

Next, they hardened the lamellar armor by tanning and lacquering. This is the type of armor seen in the Terracotta Army.

Qin Shi Huang was the first emperor of the Qin Dynasty (2210-206 BCE). This dynasty believed in the idea of legalism. They killed many people who defied the government.

They also suppressed Confucious and Daoist beliefs. Hence, this type of governance led its dynasty to its downfall.

The Terracotta army showed an improved version of lamellar armors. They had extended flaps to protect the groin. Some used bronze as lamellae and others a combination of both leather and bronze.

Many believed that only soldiers or officials who could afford metal or iron had this type of lamellar armor. Only those who were wealthy enough, adorned their Chinese armor with designs. They use ivory, rhino horn, or precious metals to beautify their armor.

On the other hand, the Han dynasty (206 BCE – 220 CE) believed in Confucianism and Daoism.

Such governance made this dynasty prosper and grow. During this time, crossbows were widely used.

They began stitching small plates, mostly iron, together with the leather tunic.

This forms a semi-flexible tunic. They extended the tunic to protect the outer upper arms.

They used iron to strengthen their shields and started creating helmets. This dynasty began protecting more parts of the body.

They also started building different types of armor for each type of soldier.

There were armors for soldiers who rode the chariots. These were heavier but gave them better protection.

For infantry soldiers, they had short tunics and better leg protection. This allowed them to move fast and quick.

Centuries later, cavalry soldiers replaced chariots. This began around the 4th century BCE. Armies with bows and horses were the new type of soldiers.

These three ancient dynasties contributed improvements and discoveries for the Chinese armor.

Though there were changes over time, the basic Chinese armor of leather lamellar structure didnt disappear. 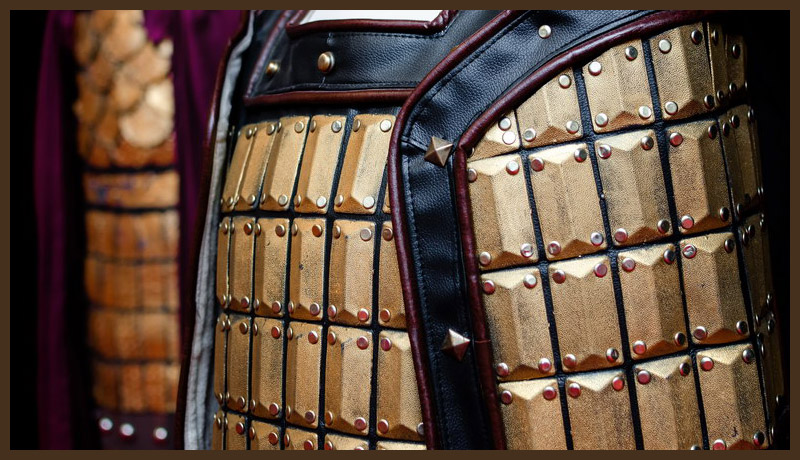 The Great Wall of China and Protective Walls

Since the Neolithic Period, the people of China have used different skills and tactics to defend their country from invaders. An example is the famous Great Wall of China that we all know. This wall defended China for hundreds of years from the attacks of barbarians.

Unlike other strategies, the Chinese army builds a protective wall over each ones territory. Inside it, another wall for the army is built. The people for each territory live inside the fortified walls.

This would also explain their history of catapults. In China, invading ones territory meant overtaking a fortified wall. You would see this in many of their war stories.

In the movies, like Mulan and The Great Wall, weve seen Chinese Warriors clad in metal armors and horses with protective coverings as well. Even though they were clad in metals, Chinese warriors were able to move swiftly and easily.

Shields before were larger because Chinese Warriors first used their armors to impress and not for defense. But as time went by, they improved in terms of weight and height.
Shields of Chinese warriors have two sizes depending on which type of warrior uses it. Small ones are for those who battle on foot and tall ones for chariot riders. Shields from early ages were adorned with faces and animals which made it heavy and ineffective.

Most helmets of the Chinese army had a hood-like shape with a hanging part to protect the net. Though they started with helmets made of rattan or leather, iron helmets came to light later on.

Helmets of the Chinese warriors cover up until their ears and back of their necks. Moreover, generals or high-ranking officials of the army had some sort of tassel on the top of their helmets.

Yet, their helmets can only protect their heads from sword blows and light missiles. Skeletal remains show that many warriors died from arrows and swords that struck their heads.

Most Chinese armors are made out of leather and in the form of tunics. However, some Chinese warriors used bronze or a combination of leather and bronze.

The Han Dynasty was rich in stocks of iron hence the reason for the ironclad armor their warriors use. They stitch their armors with small iron plates that form a tunic. It made their armor heavy but it offered greater protection

This carried on for the next centuries. Improved during the Tang dynasty, the Chinese came up with an armor called cord and plaque. This had large iron plates joined by cords and linked to a cord belt. It protected the front and back of a soldier.

Along with it came a popular long coat of armor that reached the ankles. It was made of hundreds of small metal plates riveted together.

As materials became more available, Chinese armors came with intricate designs. Ornaments and symbols on the fabric were part of their armies armors. Some helmets even had multiple overlapping plates of iron and a few with silver.

Remarkably, even if they developed more iron plates and armors, many opted to use the light and traditional leather. 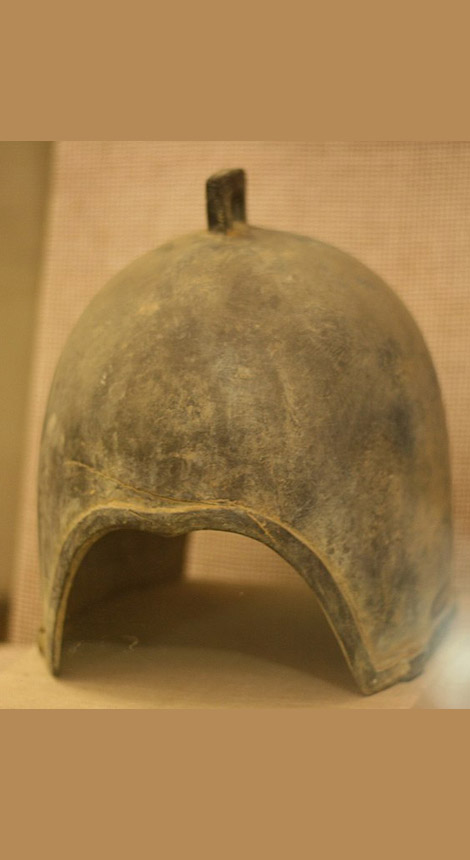 Chinese warriors used horses in exchange for chariots. Furthermore, horses are easier to maneuver and faster compared to chariots. These horses were also clad in leather or iron body armor based on the historical figurines and the Terracotta Army sculptures.

China and its military tactics improved more and more throughout the years. This started from their Chinese armors up to their weapons, varying from animal skin to leather and the iron-made materials.

Until now, China is one of those who are leading in discoveries and inventions of military gadgets.